9 months later (22 March 2020) from the violent quake of the 5.4 magnitude earthquake that struck Zagreb and the entire north-west area of ​​Croatia, causing extensive damage to homes, religious and civil buildings and leaving 20,000 people homeless , on 29 December 2020 the earth shook again with a violence of magnitude 6.4.
The epicenter was located 44 kilometers south-east of Zagreb and the quake devastated the towns of Petrinja, Sisak, Glina and the surrounding villages, causing seven victims, around thirty injured, thousands of displaced people and enormous damage to structures which have turned into a pile of rubble.
A dramatic toll in a place severely affected by the war of 1990-95, and never fully recovered, with a high rate of unemployment and social fragility.
The earth does not stop shaking and, with significant tremors, often in the rain and cold that complicate the rescue operations.
Many villages, populated by elderly people alone and without telephone, are not easily accessible as the roads are impassable due to landslides.
The earthquake victims, outside their destroyed homes, try to shelter from the cold with improvised fires, terrified by the arrival of new tremors.
Civil protection is committed to clearing the streets of rubble and to bringing basic aid. Many families and hotels along the Croatian coast offered hospitality to the earthquake victims, which unfortunately, not all of them were able to accept in order not to lose the few possessions they have left.
Many countries, including Italy, have made their closeness felt by offering significant aid: tents, blankets, stoves, containers, etc.
The Rehobot Foundation also welcomed some Zagreb earthquake-stricken families to its headquarters and distributes food packages. This is all about the emergency.
The Foundation projects itself into the future of this population and is planning a new project: the donation of prefabricated buildings in villages where survival is linked to agriculture and livestock farming.
Depopulating villages due to lack of housing would cause greater damage to the country’s already fragile economy. Every smallest donation to this project is precious.

Tags: Croatia earthquake Petrinja
Next Story
For whom and why to restore wells 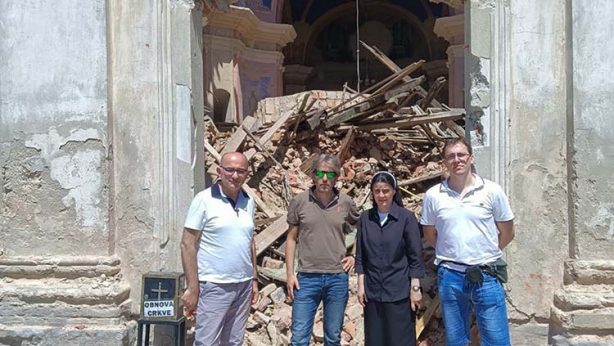 Diocese of Mantua - Presence and fidelity

A delegation from Caritas of Mantua, with the new director,...