Cortenova is a small town in the province of Lecco, surrounded by mountains with soft lines and covered by woods with shaded colors that are the background to the bleating of the sheep, the tinkling of their bells, the barking of the dog, the chatter of the shepherds and the rooster crow that, like a melodious concert, wake up the town every morning.

In this place, unknown to many, an initiative was born that has become an inextinguishable source of charity, friendships, sharing.

A mayor, Antonio Melesi, with a big heart and innovative visions, was able to involve, in the years 1991-95, the entire country in the cause of the Balkans, then the scene of death, hatred, genocide and ethnic cleansing. Aid of all kinds and with frequent deadlines arrived from the population of Cortenova.

Today, years later, Cortenova remembers the solidarity achieved by its inhabitants who had the courage to initiate and continue it.

Today Cortenova renews the historical memory of that conflict with the publication of a book ‘DIARY FROM SARAJEVO’, written by a refugee from Sarajevo, adopted, welcomed and loved by the whole country, where she remained there for 9 years: Ustalic Dubravka. 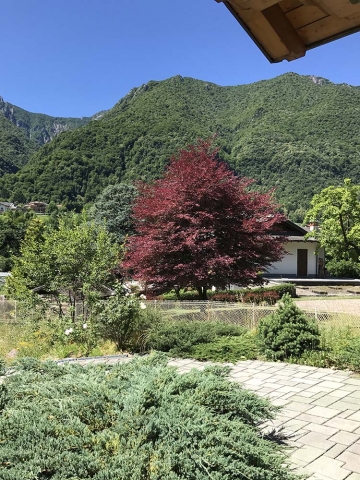 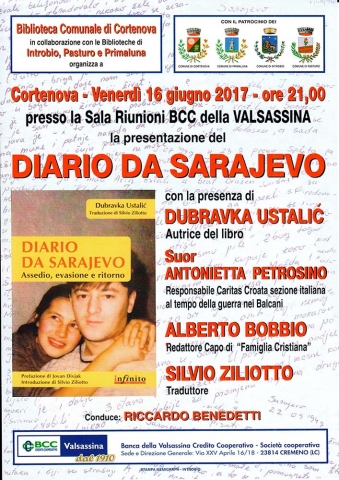 It is a diary from which feelings of fears and hopes emerge, episodes of war, family separation and many ‘WHY’

It is the legacy that a mother wishes to leave to her children so that they can appreciate and respect their own life and that of others.
These are the notes of a refugee who, separated from her husband by the Balkan war (1991-95), is forced to flee with her son from their bombed house and with her son Arin finds refuge in Zagreb. The Rehobot Foundation, at the time with the name ‘Croatian Section of the Italian Caritas’, came to their aid with the ‘Distance Adoption’ project. Providence wanted the adopter to be Gabriele, son of the then mayor of Cortenova, Antonio Melesi. Thus history is intertwined, the Melesi come to know their adopted and lasting emotional ties are born. Dubravka entrusts his diary to the Melesi family and today that diary has become a precious didactic tool, thanks to Antonio Melesi, a visionary dreamer, with clear and concrete ideas, ready to get involved, a leader who believes in what is more sacred: man

Numerous participation in the presentation of the book. In addition to the inhabitants of Cortenova there are the mayors of the neighboring villages, the parish priest and the new generations who follow in the footsteps of the pioneers of the fraternity.